Lauren Gauge interviews David Narayan and discovers what searching for oil, Uri Geller and his newly reworked mind-reading show, The Psychic Project have in common… 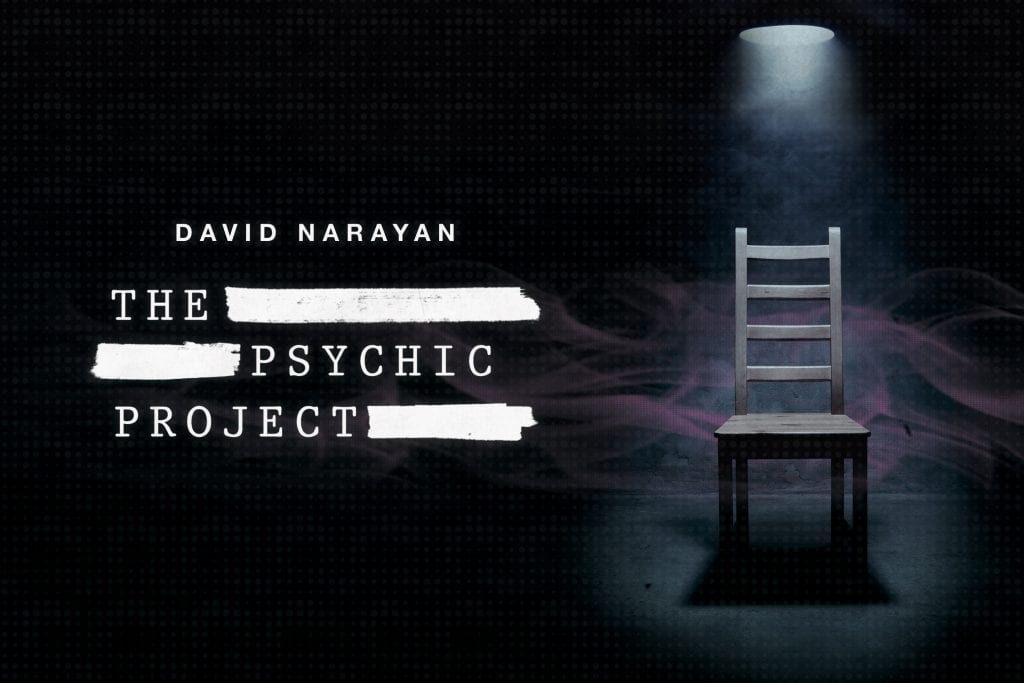 Do you want to become a psychic for one night only, or to experience how the CIA used mind-control techniques in the Cold War to deploy psychic spies (including spoon bending, Big Brother house inhabiting, Uri Geller)? Filmmaker and performer, David Narayan has created a show that enables audiences to do just that.

Unlike most mind-reading shows, it is not the performer, David Narayan, who attempts these experiments.  Instead, they are carried out live each night by audience members, using the CIA’s techniques at Vault Festival in his freshly reworked show, The Psychic Project.

How on earth did Narayan discover this research existed? “I knew about Uri Geller, and it turns out Uri Geller was one of the first physic spies they hired.” He explains, “I read an article about the UK college of policing – the body that gives advice to police forces – that said police should investigate psychic leads. This was issued to police forces and it was pulled apart in the press for being part of official guidelines to the police force. I couldn’t believe that anyone issued this as official advice to the police service.”

That set Narayan racing into researching what was behind these guidelines and if military services and governments truly believed in mind-control.

Asking your interviewee very early doors the million-dollar question doesn’t always prove so enticing: do you believe in mind-reading? Was a question I could not resist.

In true politician style, as if engulfed by the governments he had been researching, Narayan re-posed a question back to me: “Is mind-reading real? That’s the question, isn’t it?” Not whether he believes it, but whether it is real.

He concedes, “audiences are typically 50% believers, 50% sceptics.” But what exactly are audiences coming to see?

The Psychic Project’s narrative is based on the studies that the CIA began in 1972. “We basically recreate them,” he states. The show is based on a “historical story, a true story and we look at the crazy research they did. We start at the beginning with simple lab experiments where they were trying to predict symbols and trying to predict what’s inside a box. We try some of the experiments. I want to give the audience the same experience as some of the scientists of the time.”

During the Cold War spies and misinformation were rife on both sides. “[The USA] got a lot of intelligence reports that said that the Soviets were steaming ahead with psychic research.” He reveals, “apparently, they had created a machine where they would plug the psychics into it, so five different psychics would each wear a helmet and fire a beam of their psychic energy.” Scarier still though, was the force this neuro-energy beam was reported to have: “if a fly flew into the beam it would die,” scientists at the time reported.

Narayan then proceeds to get excitable, frantically fidgeting with a printed-out report that is on the table between us. It is a scientific report with graphs, diagrams and hand drawn images of places and things. It is a document that until very recently you could not easily get hold of. Narayan himself only got possession of them through a Freedom of Information Request in 2016. They have since been unclassified.

What I see before me is quite astonishing. In summary, it is relatively compelling visual proof that some psychics had at the time been able to ‘remotely view’ – a term for the practice of seeking impressions about a distant or unseen target, purportedly using extrasensory perception (ESP) or ‘sensing’ with the mind. It is a skill that is still professionally employed and hireable to search for oil, for example, today.

Narayan exclaims, “I knew about Uri Geller and it turns out Uri Geller was one of the first psychic spies [the US government] hired. I read an article about the UK college of policing – the body that gives advice to police forces that said police should investigate psychic leads. This was issued to police forces and it was pulled apart in the press for being official guidelines, and I couldn’t believe that anyone issued this as professional advice to the police service.”

However, he says, “the research programme was stopped and that research was pulled apart.” He adds, “at the point at which the programme was stopped, people disagreed about whether it was valid or not. Some people believed trickery was involved. Some said it was valid.” Naryan informs me, “Jessica Utts a statistician who looked at the stats, said this [report] is statically significant.” But as I probe on whether people still believe it today, he concludes: “The jury is still out on those studies and the validity of the mind-reading.” Stating, “I don’t think it was just cheating, I think a lot more was going on.”

There was “a programme run by Ingo Swann” David starts, “he believed that anyone could be psychic – you just need to follow a process. You can come up with a procedure and then anyone can follow it… and that’s what we test in the show.”

You invited influencers and journalists, to a 30-minute slot recently and thank you for inviting me, sorry I couldn’t make it. What did you do in those 30 minutes? Were you practising some mind-reading techniques there and then? I ask. Narayan replies, “yes, I was. The problem is if I do it with members of the public people assume, they’re stooges. Which is very hard to combat. But they are just audience members.” He assures, “in a way it’s one of the best compliments you can get, but it’s not the case.”

Towards the end of the show Narayan looks at why we see the results we see. So it’s not magic. I ask: is there a reveal?

“Yes, I can’t say what, but for all the audience apart from one and that person is about to take a big risk…”

How big a risk?

“It will hurt if it goes wrong”

There’s a rise in people vs the establishment TV shows like Hunted and The Heist. Equally, there is a lot of buzz growing of late around psalm readers and having ones fortune told by tarot cards. So why did you decide you wanted to do this as a theatre show and what are you trying to prove of disprove with it?

Considering his response, Narayan reports: “I am trying to prove that you can believe quite crazy things, if you’re drip-fed proof. Small proof.” He continues, “all the things they saw, in general, were not a blow away success; they were just little things that were just beyond the boundaries of probability. But they add up, and they start to reinforce your belief. I am trying to make the point that beliefs that we now hold quite strongly, we need to be aware that we might have just been drip fed that…” He poises is almost politician like again but this time, I can feel an air of distrust fade away and a warmth of feeling and empathy envelop the conversation: we just got way more liberal. “We need to question that. And also, not to demonise someone who believes something that you think is crazy,” he nobly deduces.

The Psychic Project early-bird tickets are available until 29th February. The show opens at the Vault Festival from 29th April.

Before we leave, Narayan invites me into an exercise. He tempts me to see if I can guess, draw and match 5 identical cards that he has dealt an identical set of to each of our hands, like a game a of mind-reader snap… where in less than 60 seconds, I am bewilderingly crowned a psychic! And the really annoying thing is, I tried so hard to thwart the experiment; I have no idea how it worked…