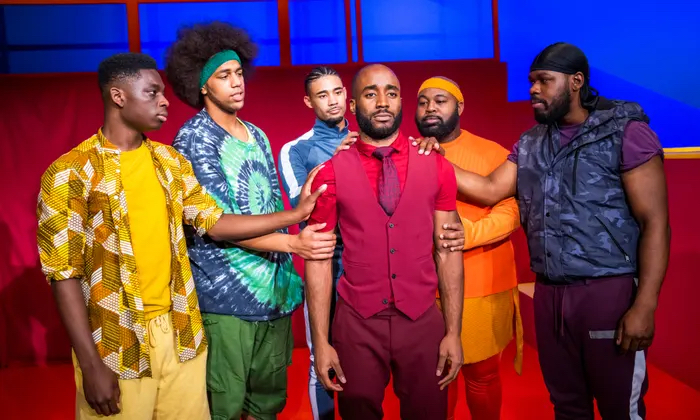 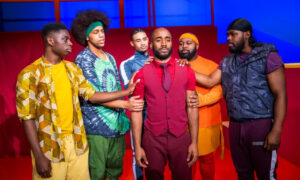 The OffWestEnd Award nominated show For Black Boys Who Have Considered Suicide When The Hue Gets To Heavy will transfer to the Apollo Theatre on March 25, after two sold out runs at the New Diorama and Royal Court Downstairs.

Inspired by Ntozake Shange’s seminal work For Colored Girls Who Have Considered Suicide When the Rainbow Is Enuf.  For Black Boys Who Have Considered Suicide When The Hue Gets Too Heavy is located on the threshold of joyful fantasy and brutal reality: a world of music, movement, storytelling and verse – where six men clash and connect in a desperate bid for survival. Father figures and fashion tips. Lost loves and jollof rice. African empires and illicit sex. Good days and bad days. Six young Black men meet for group therapy, and let their hearts – and imaginations – run wild.

The play was originally conceived by Ryan Calais Cameron in the wake of the killing of Trayvon Martin in 2013 and has been developed over the course of the last decade with young black men and mental health groups. Over 100 men auditioned for the production in 2021 which sold out both its initial run and subsequent transfer to the Royal Court Theatre, with returns queues  at both venues every night.

The full original cast return for this new production, directed by Ryan Calais Cameron. The cast, who collectively won the best performer in a play category at The Stage Debut Awards in 2022 and will be making their West End debuts, includes: Mark Akintimehin, Emmanuel Akwafo, Nnabiko Ejimofor, Darragh Hand, Aruna Jalloh and Kaine Lawrence.

As part of their work to engage new audiences, the producers are offering 100 tickets for £15 or less for every performance to youth groups, community groups and charities who would like to experience the show. To register your interest in booking some of these tickets, please fill out the form here For more information, email FBB@royalcourttheatre.com and follow @the.opencourt via instagram for updates.