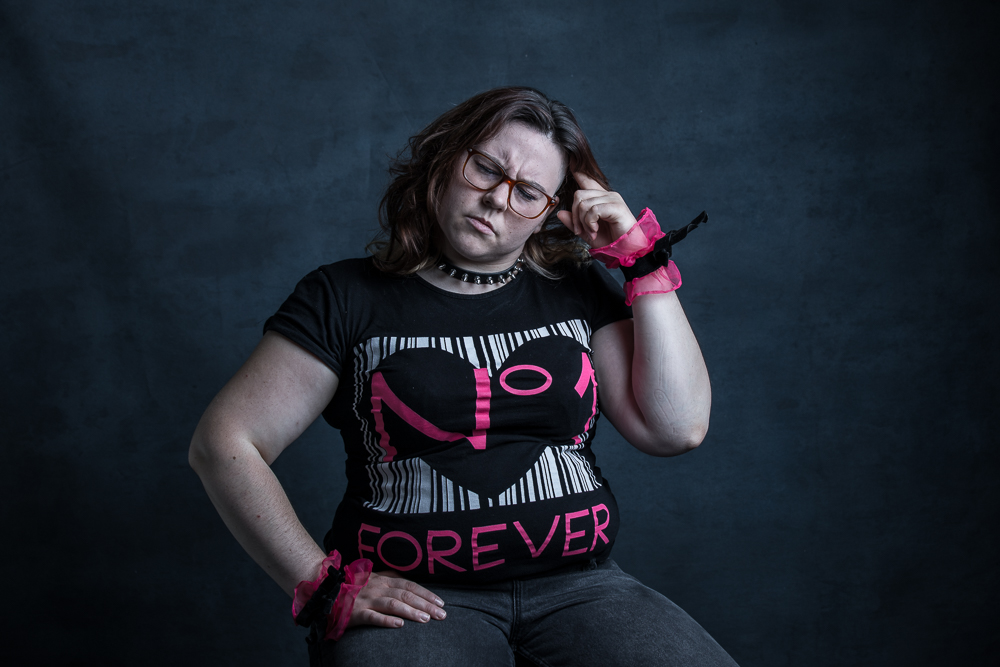 I’ve always been into creative things as far as I can recall. Every Christmas as kids, my cousins, my brother and I would put on plays for the grownups and I was part of several school plays. Top primary school memories include Silent Night in German, playing the chimes very aggressively to represent how loudly the angels woke someone up to say Jesus had been born and reading Vlad the Dracula to my class, complete with an accent for Vlad himself!

I first met Liselle (Terrett, co-programme leader and a senior lecturer at the University of East London) at 14 when I did Croydon Contacts All Stars. That was my first taste of EDR (Emancipatory Disability Research) but I didn’t know that at the time!

My secondary school & sixth form didn’t offer drama so I tried the drama society at uni. Nothing was taken seriously there, though, so I gave up on that to do other things.

I think it’d be really cool to be part of something with a disabled theatre company outside of the UK.

Do you think theatre not performed in the West End is more diverse?

Pretty much anything I’ve seen on stage has been inspiring, even if it’s just what *not* to do!

I’ve never seen anything so joyous on stage before as VIP! A Very Impressive Party by Access All Areas’ Black Cab Company. Since, maybe – but that will always spring to mind.

When I saw Grease at Fairfield Halls (2000-2004) and was more interested in the design than the acting, I knew I genuinely had an interest in stage as a general thing so that was an inspiration.

Joy by Stephanie Martin was kind of like a fairy tale. Within Sight by Ellen Renton had some of the most beautiful poetry I’ve ever heard.

I saw something by Teater Nonstop on the same day I did My Hands and Feet are Wiggling at NTNU (Trondheim, Norway) and loved the live art feel of it. I’d love to see more of their work and would happily invite them to come to Club Soda in Croydon!

Gender Neutral People Don’t Smoke. This was the very first piece I came up with during the Performance Making Diploma, which I had a lot of fun with.  I’d love to do something like it again.

My Hands and Feet are Wiggling. I’ve heard that it’s very difficult to create a piece from joy. Oddly, however, this was one of the easiest pieces for me to create as the backing music was already there and I wanted to capture something that I thought might never happen again. That said, it also led to my critique in the book Critical Interruptions Vol I: Steakhouse Live. Eds. Critical Interruptions (Diana Damian Martin and Bojana Janković)

Not F**kin’ Sorry at Soho Theatre is still going even with everything that the piece, the cast, the crew and I have gone through.  What’s more, on the back of the demo showing at Soho Theatre before its run in 2019, Charlotte Bennett (former Associate Director at Soho and now Joint Artistic Director of Paines Plough) joined the board of Access All Areas!

Even if I’m proud of something, it’s always worth seeing if there are ways it can be tweaked but also bearing in mind the balance between improvement and gilding the lily.

I’m not necessarily proud of the pieces themselves; I’m more proud of what might happen in the run up to, during or because of them.

What inspires you when working in theatre?

How to make work that’s open both to those in the club and those outside of the club. For example, #BinariesBegone, for example, isn’t just aimed at LGBT people.  My Hands And Feet Are Wiggling is very much aimed at all neurotypes.

How has the Diploma helped you?

The Diploma’s helped me through introducing me to professional techniques, creating and encouraging dialogue and given me back a social life. Also networking, which has led to other opportunities with (among others) the Wellcome Collection, Croydon Gig Buddies and First Brick Productions.

Why would you recommend the Diploma to other people?

It brought out something I’d kept hidden for a very long time, and to some level who I actually am. I’ve been supported all the way through even now 5 years on.

It holds everyone to professional standards whilst bridging a gap between mainstream arts and disabled arts, community and professional. There really is nothing else like it as far as I know.  As said by Maud Verdier when working with L’Office national de diffusion artistique (ONDA), France: It helped me begin ‘devastating norms’.

I’m working towards three pieces atm: Princess with Not Your Circus Dog & Duckies; hopefully some development of #BinariesBegone and The Interrogation. The latter’s an audio app based show exploring communication, language, surveillance and the prejudices learning disabled people face when they’re just trying to go out and about. This is an Access All Areas Performance Company co-production with Charlene Salter, Shaun Dunne, and Marmelo.

Emma graduated from Access All Areas’ Performance Making Diploma at the Royal Central School of Speech and Drama in 2016.

Performances include: Steakhouse Live commission My Hands and Feet are Wiggling (2016); #BinariesBegone (2018 -) as part of Battersea Arts Centre Occupy festival; cabaret group Not Your Circus Dogs in Not F**kin’ Sorry at Soho Theatre (2019); and the Access All Areas & dreamthinkspeak co-production unReal City at Battersea ArtsCentre (2020)