OffWestEnd talks to Jordan Paris, writer of ‘Rise’ coming to The White Bear 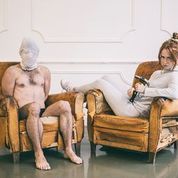 With both my parents being dancers, I spent a lot of time running around backstage as a kid. As a result, any theatre always feels like a home away from home, and that sense of awe you feel when the lights go down and the story starts has never faded.

Well, ideally I’d choose to work with Metamorph Theatre and Encompass Productions to take ‘RISE’ forward for an extended run later this year. But should the opportunity present itself, I’d love to work with Frantic Assembly. It would be brilliant to write something from scratch with such a physically talented team. Mixing disciplines is what makes striking theatre, in my opinion.

I’m not sure London’s West End is where the real magic happens. There are the exceptions, of course, but in general I find theatre is most exciting when it’s produced and performed purely for the love of the material and the belief in the message. That’s what Off West End Theatre is to me and it’s the kind of theatre ‘RISE’ aspires to be.

There’s so many to choose from, but I think the cast of ‘Emilia’ at the Vaudeville Theatre did an absolutely cracking job balancing humour and sincerity. That performance stayed with me so much I went back to see it with my partner for her birthday and bought the script. I just wanted to share it with people.

‘RISE’ being my first play for the professional stage, I think that’s a bit of a milestone for me. Especially in light of the hit theatre and new writing has taken in the past year.

What makes a really good character?

Rhythm. If you can’t feel a character’s rhythm through the dialogue (or lack of it), I personally find it incredibly hard to get to know them. I tend to listen to the same piece of music on repeat when I’m writing a particular scene. Tempo is my way into character and it’s particularly helpful when writing a play that demands multi-rolling such as ‘RISE’.

Are there any actors/actresses you would like to write a play for?

To be honest, that’s not how I approach a blank page. I think about the world first and the kind of people that would exist in it – actors who might inhabit those characters best come to mind later. Given the opportunity, however, I’d love to write for something for David Tennent, Martin Compston or Tommy Flanagan. I was raised in Glasgow and the natural pace of my dialogue would sit perfectly with them. Not to mention they’re all very talented.

A play that’s already been written by someone else? Probably ‘Black Watch’ by Gregory Burke. If you come to see ‘RISE’ you’ll see I love writing for regional accents and tackling social issues with black humour, both of with Burke does beautifully.

Wed 21 July at 18:30 & 20:30 at the White Bear Theatre
A world premiere and debut play by Jordan Paris / Co-produced by Metamorph Theatre & Encompass Productions

Jordan Paris studied at the University of Edinburgh before training at Drama Centre London. Leaving to join the cast of Harry Potter and the Cursed Child in London’s West End, Jordan began dedicating his time between shows to writing theatre, the subtext of which was heavily influenced by his earlier study of psychology. Believing theatre can be an agent of change, Jordan strives to shine a light on important issues without the audience feeling like they’ve heard it all before. ‘RISE’ will be Jordan’s first play for the professional stage.