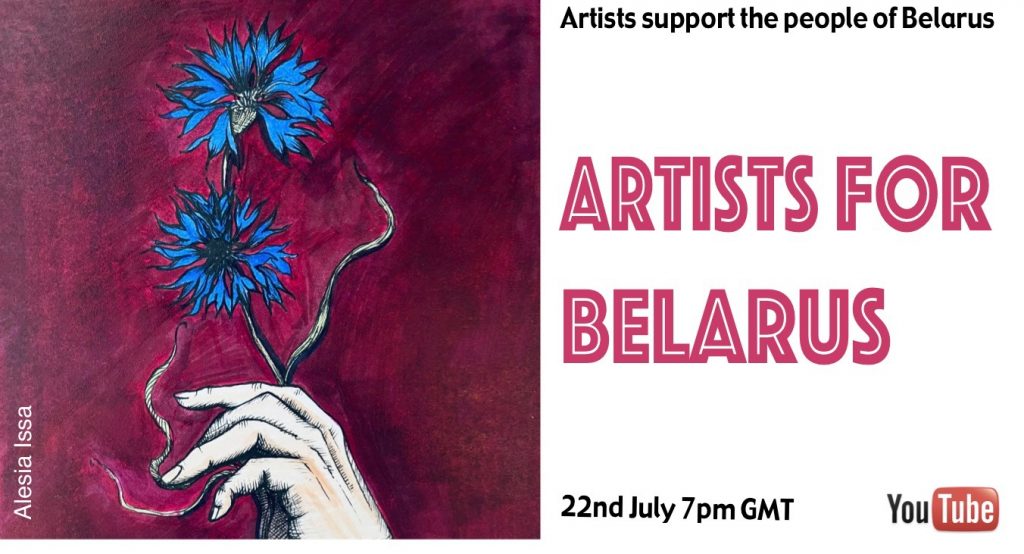 Belarus is being crushed. Following a sham election and the country’s biggest protests in its history, the West continues to turn a blind eye. For almost a year now, the people of Belarus have been demanding democratic justice in the face of increasingly brutal repressive measures from Alexander Lukashenko, the 65-year-old dictator who has ruled over the nation in the heart of Europe for more than 30 years. But there is a beacon of hope this July in the form of an open and free live streamed global gathering of artists.

When Lukashenko declared himself president for a sixth term after elections in August 2020, it was so obviously rigged that mass protests started immediately*. The protests have been astonishingly peaceful, yet Lukashenko’s reaction has been violent with 38,000 thrown into prison and many tortured. His diversion of the RyanAir flight to detain and torture young blogger Roman Protasevich and his girlfriend shows the lengths Lukashenko will go to crush peaceful dissent. *Since confirmed by Organization for Security and Co-operation in Europe Office for Democratic Institutions and Human Rights.

Artists elsewhere cannot and should not stay silent. In response to the injustice that’s happening in Belarus, John Farndon, Larissa Itina (AngloRussian Culture Club), and Sands Films Studios are hosting a live streamed event on 22 July called Artists for Belarus to spread the word and encourage a global show of solidarity.

Part concert, this three-hour virtual event provides a platform for artists and audiences to send a powerful message of support to the people of Belarus in their struggle, and highlight the ongoing call for justice worldwide. It brings together a host of more than 30 celebrated poets, musicians, actors and thinkers livestreamed from the legendary Sand Film Studio in London’s historic Rotherhithe, joined by live online contributions from across the world including as far afield as Australia. Night of Broken Glass, a 40 strong musical is to be beamed all the way from Melbourne with a diverse cast about the Australian aboriginal who in 1938 walked hundreds of miles to protest against Kristallnacht.

The line-up of performers is astonishingly exciting, boasting top UK, European and Slavic contributors.  Amongst those confirmed is Andrei Kureichik, one of the top playwrights, screenwriters and producers in Belarus. Author of some 30 plays, he has 17 credits on IMDB as a screenwriter, 4 as a producer, 3 as a director. His plays have been performed at the prestigious Moscow Art Theatre and Janka Kupala Theatres in Moscow and Minsk, as well as at numerous theatres throughout the former Soviet Union. He is a member of the Coordinating Council of Belarus, whose members are called upon to lead the transition to a new government in Belarus. Many of the members are now in prison. It has just been confirmed that Kureichik will be joining virtually to share an exclusive excerpt from his new and even more powerful verbatim piece: Voices of Belarus.

Kureichik’s new play is a documentary text based on published interviews, testimonies and letters of Belarusians who were victims of political terror in Belarus during the 2020 revolution. It promises to be mind-blowing.

“This text is a collective confession of a nation that has been beaten, raped, and insulted. These are the voices of victims of violence, people who have suffered seriously. The text comprises public interviews and letters from political prisoners, and from Belarusians who have suffered from repression. All names and surnames are genuine. Their stories form a document. A document of historical significance.”

From the British line-up of artists performing at the event is the much adored singer-songwriter and rising star, Zoë Wren. Since starting out as a London Underground busker, Zoë Wren has been invited to play shows from the Cambridge Folk Festival to opening for Ralph McTell. Described as “refreshingly bold”, her songs hook you from the first line, and have been heard on BBC Radio 2 and London Live. Wren’s debut album Reckless River was named Fatea’s Debut Album of the Year 2020, its lyrics “gloriously delivered with intonation, inflections and high notes which evoke Joni Mitchell at her very best” according to Folk Radio UK. On Twitch, she is a Twitch Partner and livestreams every week to ten of thousands of viewers around the world. Wren also performs with Jasmine Watkiss as duo Roswell, winners of Purbeck Rising 2018 and Celtic Connections Danny Kyle finalists. Her coy crowd-pleasing humour and humility will be a treasured set of the evening alongside numerous other poets, musicians and thought leaders.

To watch the event pre-book your free ticket HERE and join the live stream via Vimeo or Sands Film Studio. Join the Facebook event for details and updates on the night. If you’re unable to join on the 22nd at 7pm but wish to support the people of Belarus you can share the link to the event on social. You too can have a powerful impact: #ArtistsforBelarus unite.

Alternatively, people can write to their MPs demanding international action, write letters of support to the young protesters trapped in prison, follow the stories and support the work of the young Belarusian artists contributing to this event, Hanna Komar and Alesia Issa.

To quote, Alesia Issa, a young artist in Minsk, about the event: “Thank you all so much for you doing this project. It’s very important and inspiring. Now people [in Belarus] are so much depressed… This support is like fresh air.”

Precarity is an inevitable part of artistic life, but human rights are sacrosanct and this uplifting powerfully charged eclectic event aims to reach as wide an audience as possible to unite for Belarus and global democracy. This is your invitation to be part of it.