OffWestEnd talks to Jaivant Patel, director of YAATRA, on its Autumn tour and premiering at Tara Theatre on 17 October 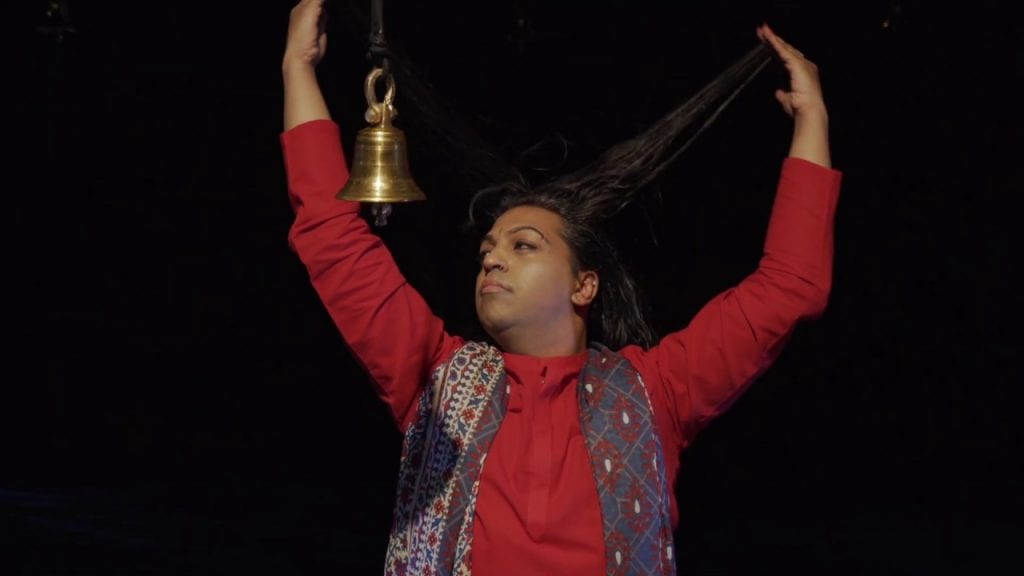 What first attracted you to dance?

My first experiences of dance were very cultural celebrating Indian festivals in the UK such as Navratri and Diwali. I used to and still love attending Navratri, a nine-day festival celebrating mother universe and the mythology surrounding her protection of life. At this festival a folk dance called ‘garba’ is performed around a clay pot with a flame burning inside of it representing the light and the conquer over the darkness of evil. The folk dance is famous and attributed to the Gujarat region of India. I was also fascinated and inspired by watching the elaborate dance sequences of Indian cinema and Bollywood. I loved watching the beautiful costumes, jewellery and sets being used alongside the infectious rhythms being used. I still remember my cousins practising and recreating some of these sequences to perform for the local Diwali show.

If you could pick any one person or dance company to work with on who/which would it be?

Kumudiniji began her career dancing with the famous Ram Gopal as he toured the west and exposed Indian dance to the eye of many abroad for the first time. She is particularly renowned for the multi-person choreographies. For me the beauty in the essence of her work is being able to keep a sensibility in the purity of a classical form which is contemporary in context.

Having recently been a delegate for the British Council in their artist development programme for Edinburgh Fringe and the British Council Showcase I understand the desire for a safe testing ground needed for short runs of productions. In parallel I also see the need for spaces to promote diverse works reflective of the many communities present on the UK landscape. Off West End Theatre contributes to the national cultural landscape by doing this in a very accessible way which is important for engagement of the arts in the UK.

There are many productions I have seen that have inspired me. In the context of the subject matter I am exploring, I have to mention a play called ‘Hijjra’ written by Ash Kotak.

I saw ‘Hijjra’ around 2001 during my dance training years at Northern School of Contemporary Dance in Leeds. ‘Hijjra’ was very innovative for its day in a time where true LGBTQ+ representation, especially South Asian in arts, media and culture was very scarce.

‘Hijjra’ made a huge impression on my during a stage in my life where I was developing my identity both as an open homosexual man and dance artist.

I am most proud of my current work, a dance production entitled YAATRA, an evening of solo Kathak and contemporary dance. YAATRA explores the rich possibilities rooted in South Asian LGBTQ+ narratives.

This piece really pushed my own boundaries during its creation, especially from the perspective of it reflecting a change in my own artistic practice. I trained as a contemporary dancer and have for the last 4 years started incorporating the Indian classical dance form of Kathak in to my artistic practice in a desire to create an idiosyncratic language reflective of my identity as a British Indian.

What things in your personal life do you draw upon when you perform this piece?

YAATRA draws on my own experiences as open homosexual man with faith belonging to the South Asian diaspora. In particular I share aspects of my own journey of navigating the complexities in the intersectionality of living in one culture, whilst paying tribute to traditions, heritage and often untold stories of another.

The piece is also heavily influenced by my grandma and my personal reflection of growing up around her and seeing her practice her faith. It features her voice speaking in Gujarati, my mother tongue, singing hymns and reciting Sanskrit scriptures.

Yes absolutely, I would love to collaborate with artist such as musicians, visual artists and other creatives from the South Asian LGBTQ+ global community who are making exciting work.

Hari Krishnan is an Canadian dance maker whom I find extremely exciting in the perspectives he uses to create important LGBTQ+ works such as ‘Siva kissed Visnu’. Hari pushes important boundaries in dance globally and successfully lifts burdens often placed on form such as classical Indian dance. Hari trained in the Indian classical dance form Bharatnatyam.

Which director/choreographer do you respect most on OffWestEnd at the moment?

Amongst many Pravesh Kumar from Rifco is a director whom I respect immensely. His latest work ‘Mushy’ under the banner of his company will be playing at the Arcola Theatre in October. I have always admired Pravesh for championing British Asian stories at the forefront of high quality productions. I loved his last show Miss Meena and the Masala Queens, around the untold stories of the South Asian drag community from Birmingham.

Currently YAATRA is on its Autumn tour for this year, including the premiere at Tara Theatre in London on 17th October. YAATRA is also touring to: Midlands Arts Centre, Birmingham – 13th November, Arena Theatre, Wolverhampton – 23rd November and Deda, Derby – 28th November. I am hoping to continue touring YAATRA in 2020 for which venues/dates are still to be confirmed. YAATRA will also be featured in an upcoming book entitled ‘LGBT+ Identity and Faith’ written by Sean Richardson.