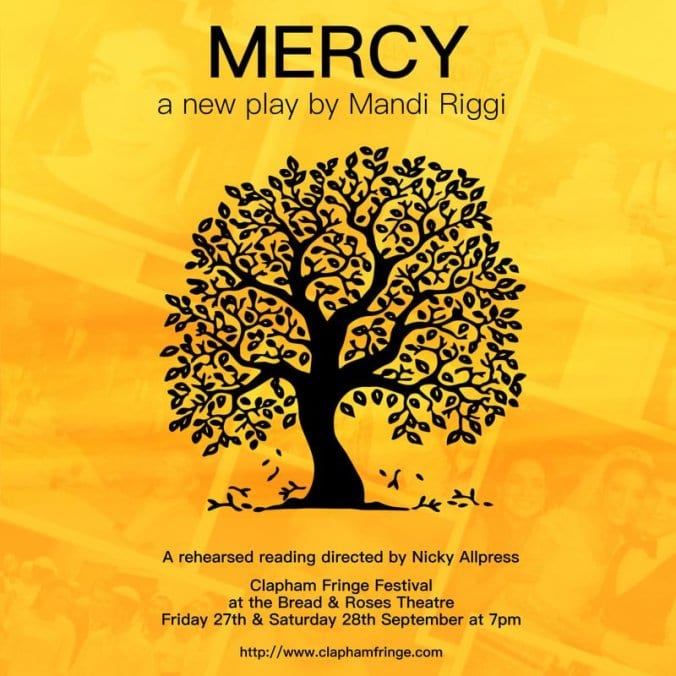 The daughter of Iranian parents that fled their homeland in 1979, Riggi grew up in the UK with a homelife that was often nostalgic. Written as an antidote to the impending sorrow of her father’s death, Riggi writes to celebrate life and inspire generations to preserve Persian culture after years of being cautious about writing about her heritage for fear of being typecast.

How did you get into the theatre industry and playwriting?

It was definitely a journey. As a child, I desperately wanted to be an actor and at the school I attended the drama teacher would never pick me for any of their productions. I recall complaining to my mum at some point and she embarrassed me by making a big stink about it with the headmistress. So, I was given my first role as the Cheshire Cat in a play adaptation of Alice In Wonderland. That’s when I really fell in love with theatre and especially writing. I had always been writing short stories as a child, but soon began writing short plays as well. Albeit I never showed them to anyone. I never thought one could actually write as a profession. Since I was also a visual artist, my art teachers encouraged me to consider becoming a fine artist. I left theatre to pursue art, which eventually lead me to studying filmmaking and writing for film and TV. Since it takes literally years to get a film off the ground I returned to the immediacy of theatre, which was always my first love. I rediscovered playwriting and directed for the stage. Soon after, I became a member of the renowned Playwright/Directors Unit at the Actors Studio, honing my skills under the mentorship of the American playwrights Lyle Kessler, John Patrick Shanley and Stephen Aldy Guirgis.

You’re producing a rehearsed reading of your next play, Mercy, at the Clapham Fringe. If you were to describe Mercy in two sentences what would those be:

Mercy is a dark comedy with a spiritual twist, centring on a headstrong matriarch of a British-Iranian family and her unyielding decision to break tradition. Amireh, who has been given only a few months to live, makes an end-of-life decision by designing her own “death ceremony” involving the hallucinogenic drug DMT, much to the chagrin of her traditional and conservative Iranian husband.

How did this topical subject matter of aid-in-dying come into your life and drive you to write a play about it?

Mercy delves into themes of grief and acceptance. I wrote this story whilst I was in a saddened state of anticipation of losing a father. It was my way of accepting it and finding bravery in that very acceptance. I strongly believe terminally ill patients of sound mind who are suffering from intractable, untreatable pain, must be given the choice of a compassionate doctor assisted death without consequence, in the last days and weeks of life. Regardless of where you come from, or what your background is, you are here for a short amount of time and you will eventually be faced with mortality. Sadly, that mortality you often face comes in the form of a terminal illness. Why should there be laws that force you to go through prolonged suffering? There’s a line in the play that talks about how we treat out pets with more dignity than we do ourselves. I aspire to connect audiences to a universal need surrounding questions about mortality on both a personal and political level. Mercy is really about celebrating one’s life.

Big spiritual question for you on the future of “traditions”. How do you think culture-specific traditions will evolve and be received in more ethnically mixed countries in years to come?

It’s absolutely crucial for ethnically mixed families to preserve their cultural history and heritage no matter where they live. I personally shunned away from my “Persian-ness” for many years and although I understand Farsi, I regret not speaking the language fluently. But I’m extremely proud of my heritage and making a point of writing about my culture as much as possible. Preserving culture-specific traditions make your adopted country that much richer and add colour to its streets. I know political nationalism is on the rise globally, but the hope is that in our daily interactions with each other we continue to celebrate, honour and preserve one another’s culture and heritage.

What cultural and generational differences have you experienced in your family given your parents’ generation were forced to flee their homeland?

Both my parents had studied and lived in England before going back to work in Iran, so going West wasn’t much of a culture shock for them. What affected them most was the loss of their homeland and being unable to return. By the end of the 1980s, there was awareness that their condition of exile was permanent. Return to the old country became an impossible dream. My parents were and still are plagued with a longing feeling for an almost mythical land they grew up in. Because my family is scattered across the globe, I have never met or seen most of my cousins. I did not know or have any Persian friends until I became an adult and was inspired to learn more about my heritage. Preservation of culture and identity is what I see the Iranian diaspora struggle with the most. The children of the exiled who became first and second generation westerners, mostly do not speak the Farsi language. Or if they do, they certainly cannot read or write it.

Music and poetry plays a big part in the Iranian culture. My father’s generation was always at ease with reciting poetry by Rumi, or Hafez and quoting from Ferdowsi Shahnameh (The book of Kings) as if they were Shakespearean actors on stage. Such traditions and care for Persian literature has sadly been lost when it comes to younger generations, or “exile kids”. My play is a love letter to my culture. I hope it encourages younger British-Iranians to become inspired and to preserve some of these wonderful traditions.

What is the most powerful tool that you use to communicate and land the points you raise in your plays with your audiences?

Comedy. As dark as possible. Levity is something we need in our everyday lives, especially with the grim state of the world these days. That is why we go to the theatre, to leave all that behind, to have a laugh once in a while and to walk away with a new perspective on life.

You’ve worked extensively across the United States – do you find or expect different reactions to your comedy and your plays in London?

I’ve been told I have more of a British sensibility when it comes to my work, partly I assume because I grew up and studied in the UK before moving to America in my teens. However, I was greatly influenced by America as I became an adult living in New York City. My last play which premiered at the 2018 Edinburgh Fringe was quite American in style, but I was chuffed when I heard it was compared to The Lover by Pinter. I’m excited to see the audience reaction to Mercy, which is very much an English play.

What character’s journey do you most align with personally in the play and why?

Believe it or not, Terri, who plays the fish out-of-water American daughter-in-law. It’s mostly because, without giving too much away, I had a similar experience, which inspired the whole character to begin with. In my personal experience I was a fish out-of-water Persian girl trying my best to fit into an American family. In writing Mercy, I flipped it and made Terri an American desperately trying to fit into a British-Iranian family.

How can audiences see the show at Clapham Fringe and why did you decide to showcase Mercy at this Fringe in London?