A world first for vaginas everywhere – get to Vagina Museum in Camden and see Polly Clamorous’ show Lady and the Cramp. It sounds painfully good. 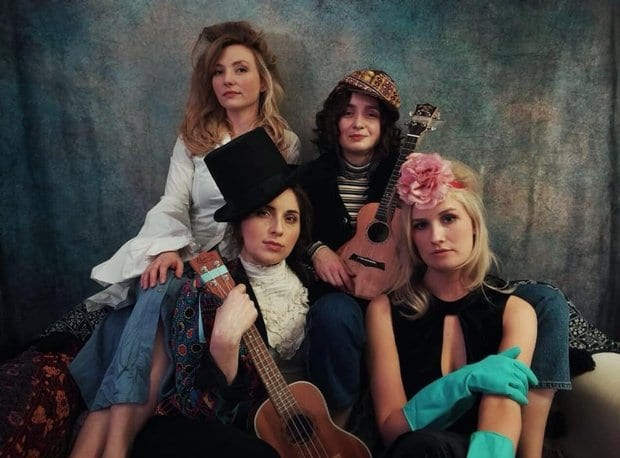 After a successful fundraising campaign the World’s first Vagina Museum opened in Camden this Autumn and Polly Clamorous is performing their fantastically well suited theatrical creation, Lady and the Cramp. This Saturday 12th October promises to be a wholly appropriate celebration of the Vagina Museum’s now permanent home.

There once was a Lady and she was assigned a Cramp that would define her experience of the world around her Lady and the Cramp is a quirky comedy-cabaret that sets outs to unravel the complexities of the of their bittersweet relationship amidst the backdrop of an era of man-splaining, “Me Too” and the conformist pressures of anal-bleaching.

How does an all-female comedy quartet that’s “out to air their dirty laundry” go about creating a vision for the company and each show they create?

Reducing shame and stigma surrounding taboo subjects that concern femininity, sexuality and “womanhood” seems to be the binding force that melds the troupe together. That and similar taste in wine! As a troupe we share the vision that comedy, particularly music satire, furnishes the audience with ways of viewing the female performer, as she uses her time on stage to challenge the many assumptions that surround her sex. Shifting some of the meaning and connotations that have generally been accepted into the “female fiction”. We use comedy in this sense to disarm and challenge superficial modes of thinking surrounding our bodies and what we choose to do with them! I suppose what we mean by “out to air their dirty laundry”, is that we as performance artists cannot retire into our private selves, because our private selves are exactly the place where power is able to build its base.

I chat to lead artist maker Aurora Richardson to penetrate Polly Clamorous and enjoy hidden insight on their current show and also about the troupe, with frankly the best name I’ve heard in years! Polly Clamorous is an infant at 2 years old, but they sound vitally experienced in other ways. What is the origin story for the all-female cabaret troupe?

Polly Clamorous initially formed whilst on our respective courses at RADA. I was in the midst of creating my dissertation piece Ovary Dose (yes I do appreciate a good pun), when I approached Stefanie Bruckner and Jamie Bell with whom I had become friendly (we feminists have to stick together – you know?) Jamie and Stefanie are incredibly talented artists and we found we really worked well together. The troupe wasn’t complete however until the wonderful Isabelle Woolley joined us. Isabelle and I met whilst training with the National Youth Theatre and she had that future-clam vibe. Luckily Jamie and Stefanie gelled with Isabelle as much as I did and the rest is history! Or HERstory, I should say. We’ve since been very fortunate to have performed together at the Edinburgh Fringe, Brighton Fringe, Soho Theatre Upstairs, Camden People’s Theatre and Toulouse Lautrec Jazz Club – to name a few.

Daring to be diverse, is there a time where you think this is too much? What’s your check, if any, to ensure that you are making work that’s always grounded in your vision?

That’s a really good question and it’s something we’ve struggled with at times. We’re billed as a comedy cabaret and the majority of our work is very funny (or at least – we’d like to think so). However, many of the issues we sing about (having our drink spiked for example) can be quite confronting. To keep in check, we always ask ourselves the question of “why is this song or message important”, if we can answer that, then I believe wee able to stay grounded in our vision.

Such evocative subjects are so personal, how do you draw on your personal stories and experiences but make them accessible to all – if indeed you want to appeal to all?

There’s something about comedy that’s able to unite even the most unlikely of persons. Take Victoria Wood for example, a comedian revered by many. Wood wrote generously and sympathetically about women and would comment very openly about weight gain, cystitis, periods, disappointing sex and the trials of middle age. What made her so successful was her relatability factor. Now I’m not saying that men could relate perhaps on the same level as periods. But Wood wrote in a way that captured the attention of everyone, including men, and invited them in to the discourse in which they were encouraged to laugh too. She didn’t target or alienate particular audiences. She just said it how it is. When in doubt I think we should ask “What Would Wood Do?”. We want to tell our stories with conviction, doused in humour and hope that appeals to our audiences. We hope that by us telling our stories, that audiences may be able to locate themselves in our narratives.

I have to share my favourite Victoria Wood joke:
“I looked up the symptoms of pregnancy – moody, irritable, big bosoms – I’ve obviously been pregnant for 36 years”

How interested are you in making your shows speak to a male audience for example? Would you ever prefer to have male audiences over female?

Our audiences have generally been comprised equally of both men and women, which has even caught us by surprise at times. It’s enjoyable for us when the fellas can also have a laugh. Our work can attract people that have an interest from music to politics to intersectional feminism. We know you don’t need to identify as a woman to have an interest in those areas. We’ve had men come up to us after shows and comment on their shock that “tampon tax” was genuinely a thing. We even had a male member of the audience in one of our Edinburgh shows return on the 2nd night and bring along his 80 year old dad. I don’t know if we would prefer to have male audiences over female, as our work is generally characterised by being made about women for women. That being said we don’t want to discourage any audience member from attending. We just want the audiences who do come in, to respect the space and our stories.

Who knew Camden had a Vagina Museum? And now you’re performing Lady and the Cramp there! What kind of a museum is it? A naughty backstreet museum that has a rogue air about it scattered with toys, like one I ended up in Barcelona once, or, altogether different?

Quite different I believe! But hey, maybe I’ll give them a call and see if we can score a performance slot. We’re always looking to expand our demographic. ？ola!
The Vagina Museum, in Camden, is the world’s first brick and mortar museum of its kind. It’s dedicated to vaginas, vulvas and the gynaecological anatomy. The museums founder, Florence Schechter came across a penis museum in Iceland but was shocked to discover no vagina museum existed anywhere in the world. So, she rectified this. The goal of the museum is to erase the stigma surrounding the body and give confidence to people to talk about issues surrounding the female form. In addition to being a museum, it’s also a space for talks, workshops and performance pieces.

What is your show Lady and the Cramp about?

Lady and the Cramp is a musical diary of sorts. It is a cabaret piece that is inspired from personal testimony, with issues ranging from contraceptive pills to our thoughts on newly imposed legislative bills. Our songs rewrite and reclaim the female experience through the use of song and sketch that to most is liberating, if not humorous and thought-provoking. Lady and the Cramp subtly teaches audiences that yes, the personal is political. That issues to do with sexuality, personal safety, body image and female health are deserving of a platform to be heard.

*Don’t Live in Smear – for example is a song we created about visiting the doctor for a cervical screening. We wrote this song in response to our insecurity over taking off our knickers in front of a complete stranger. The song highlights how important it is to take control over our health; that we have nothing to be ashamed and embarrassed about.

What’s your process of creation, edit and producing a production? Is it important or necessary in a troupe to have defined and delineated roles when producing?

Usually before we embark on a project, we sit down as a group and get to talking (for hours!). Scribbling down all the areas we are interested in exploring. Other times we look to the media for inspiration, news articles, court cases etc. One incident that came to our attention was how the Australian police reported that “women should take control over their personal safety”. This was in Melbourne, after the rape and murder of comedian Eurydice Dixon – a budding comedian who was attacked after walking home from a gig in 2018. In response we wrote a song which detailed the hypocrisy over this statement.
*the police were quick to say, “if women learned to behave, men wouldn’t find the opportunity to rape”.*

Defined roles are extremely helpful. They keep us on the ball. We are all active in the creative process, however Jamie for example designs our posters, Isabelle does the finance, Stef is our tech/sound wizard and I suppose I have taken on the producing role. Seeking gigs, applying for funding and trying my hand at publicity.

What’s your role in Polly Clamorous?

I would say I’m most active in the songwriting/music creation phase. I like to bring songs into the space and workshop them with the group. This usually means testing it out – locating its strengths and weaknesses, tweaking its lyrics and imbuing it with our own Polly Clamorous quality! Usually by adding 4-part harmonies or a banjolele. I enjoy writing comedic songs with strong socio-political undercurrents, disarming audiences with my satirical barbs. Zaps*

How do you hope audiences will receive the show this weekend in Camden and what can the paying public expect?

We are super excited to perform at the Vagina Museum, because let’s face it, it’s right up our … (you fill in the dots). We hope the show will be well received! *sweats*. The public can expect an honest, open and comedic exploration into what it means to be a woman in the era of Me Too, “mansplaining” and labia-plasty – the fastest growing cosmetic surgery on the planet. We hope to shake off some dust, ruffle some feathers and have a laugh. Inspiring, educating and entertaining along the way.

Absolutely! We have a spare vagina costume – how do you feel about wearing it. One size fits all 😉 *that’s what she (Vagina) said.

*Polly Clamorous will be collecting menstrual items
at the performance for Bloody Good Period.*