OffWestEnd talks to Samia Malik, who is launching her latest project at Rich Mix on Sunday 27 October 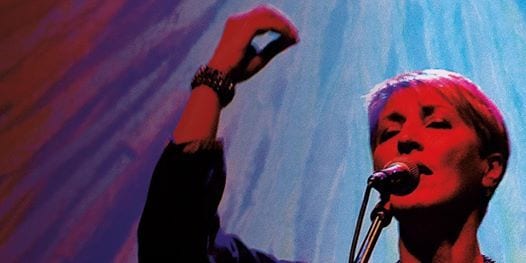 What first attracted you to performing?

I grew up in the UK listening to Bollywood film songs and Urdu Ghazals so it’s always been a deep connection, though my family were not particularly musical. I was greatly influenced by the legendary Indian director Guru Dutt whose films explored themes such as love, integrity, art, class, hypocrisy and politics. I loved the voices of both Geeta Dutt and Begum Akhter, and the incredible poetry of Faiz. When I was 15 I discovered classical Indian music in the film Baiju Bawra, and was inspired to learn about this traditional music. But women from my background are not allowed to sing, especially not in public, so there was no chance then of any training or learning. I just continued to listen and enjoy the songs.

Many years later, in my late twenties and as a single parent, I finally followed my dream and I was lucky enough to be taught in London by the great Baluji Shrivastav OBE. For a number of years I trained in Classical vocal techniques and then began using this knowledge of raag and taal to create my first compositions for poems published in We Sinful Women – Contemporary Feminist Urdu Poetry (1991). Feeling that these poems, through thrillingly powerful and inspiring, did not explore my own experiences of being an Asian woman from a Pakistani, Muslim background who grew up in the UK, I began to write my own songs, focusing on issues of race, gender and identity. Much later, I did a visual arts degree. Films of translations and projections of visual art now supported my live songs. And then of course I had to perform them!

If you could pick any one person or venue to work with on your next project, who/which would it be?

I have had the utter and immense privilege of working with some of the best artists in the world, including the legendary Mallika Sarabhai and Baluji Shrivastav OBE as well as very exciting rising superstars such as Giuliano Modarelli and Al Macsween, and extraordinary long time collaborators Sianed Jones and Sukhdeep Singh. Long may this continue!

For the next project, wow…! In my ideal world then I shall dream:

With music, I would love to work with Coke Studios in Pakistan.

And for film, I would love to work with a director, such as the amazing Gurinder Chadha or Mira Nair, who explore similar themes to me in their work.

I have seen some incredible work, but what sticks in my memory was one I saw many years ago, in Norwich Arts Centre – a dance piece called Filigree, with dancers from Indian, Arabic and Flamenco traditions with their respective musicians. In the first set they showed their individual traditions, which was glorious in itself. But what blew my mind was the second set, where the dancers and musicians came together in one choreographed piece, where you could clearly see the links between each tradition and the way they interpreted the moves and the music. It was way more than the sum of its parts. It was thrilling to see how cultures can brush up against each other and be transformed and re-energised.

I am going to be like the Booker judges and choose more than one!

Azaadi: Freedom, my last touring show was in fact the last thirty years of my life as a creative artist – both as a songwriter and as a visual artist – condensed into an hour! So of course it is very close to my heart, and I will be continuing to develop it in the future.

And of course I am incredibly proud of my current touring show, Samia Malik UK Tour and Album Launch which is a continuation of Azaadi: Freedom: a development, an opening into a wider musical language – more of a concert than a narrative show, and I think it appeals to a wider audience.

Even more then these successful shows however, I am most proud of my work in women’s organisations such as Southall Black Sisters, The Angelou Centre in Newcastle and Humraaz in Blackburn where I deliver solo performances and songwriting workshops. The response has been incredible – women have told me that I have put their stories into words and images: my work makes them feel understood and empowered. They too have created powerful new work out of their own experiences. I am equally amazed, gratified and humbled by this response.

What things in your personal life do you draw from when you perform?

My work, both as a singer/songwriter and as a visual artist is completely informed by my personal experiences. However, it is interesting how very diverse audiences have identified with the themes I explore. Music and art can unite us. I want us to question the motives of those who seek to separate us from each other. What is true is that we breathe and live and respond to art if we open our hearts, and conversely a more open heart lets more in. Music and art can teach us that we have more in common than that which divides us.

Who is the best artist performing on Off West End today?

So sorry I can’t really answer this – I have been so busy and wrapped up in my own work that I just haven’t been getting out much!

Musical, comedy or drama – what’s your preference to watch?

Drama with comedy a very close second. Depends on the context and content of course!

Next year, there are many plans hatching. More workshops in women’s organisations.
More touring, for sure. Azaadi: Freedom as a film…
But first – a rest!