OffWestEnd talks to David Furlong, artistic director of Exchange Theatre, releasing the behind the scene documentary IN Exchange, and currently director as part of FIVE PLAYS at the Young Vic theatre. 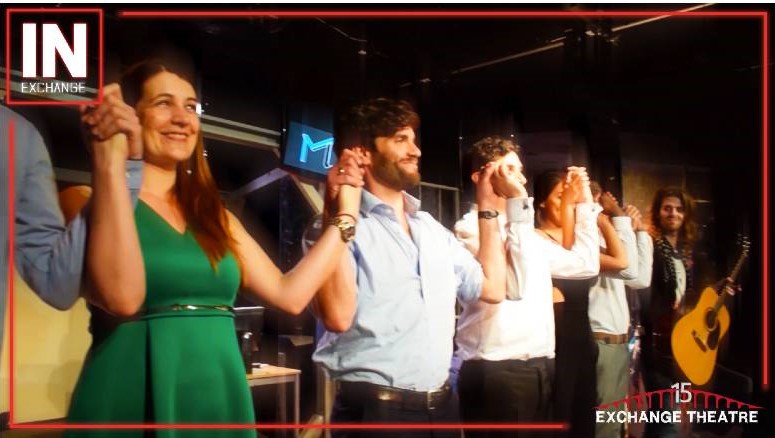 David is from Mauritius and trained as an actor in Paris National Theatre of Chaillot. A versatile stage, screen and street performer, he has acted extensively over a 20 years career in France and London, in plays, films, street theatre and devised pieces including leading roles like Macbeth and with companies like Border Crossings. As a director he established bilingual company Exchange Theatre, in 2006, and have been its artistic director, translator and producer ever since. In freelance, he was assistant director at the Royal Opera House and YOUNG VIC Jerwood director in 2020.

It was actually cinema that triggered my love of theatre. I saw the Cyrano de Bergerac movie with Gerard Depardieu when I was nine and it changed my life, I discovered a great theatre text, but at the same time, through the cinematic movement, I felt that I understood what was directing and story-telling. I then got into Theatre through French classics like Moliere in France where I was growing up as a teenager.

I am fortunate enough to be able to answer that I working now with the theatre which is the answer to this question. The Young Vic theatre has always produced game-changing forms of theatre which attract people from many different backgrounds, it has championed theatre-directing for years and given free training through the directors programme to hundreds of practitioners. In process, it was always the building I wanted to be part of. I’m proud to now be Jerwood assistant (on a show that was cancelled) and be given the opportunity to direct as part of FIVE PLAYS. There is no other place in the Uk that would have been more right to create the play I’m directing with Gael LeCornec about invisibilised mixed-race identities.

The emergence of one-person shows which are topical about diverse identities, and not just comedy stand ups are very interesting because they offer a lot of new stories which weren’t told before. The Off West End is no doubt a place of permanent experimentation and an incredibly vast and diverse, enriching ecology of wonderful humans pioneering on ideas, educating us as audience, championing safe and inclusive creative spaces. In recent years, with new young collectives, it’s also evolved a lot on the place of devising, and how to create work collaboratively. Though it’s still oddly divided between physical theatre, ‘straight’ plays, musicals, stand ups, improv, somehow not quite mixing… some practices in rehearsal rooms can still be found to be stuck in old traditions and bias. And even today, 15 years after creating Exchange Theatre, the mere ideas of foreign plays is still often seen as exotic, and multilingual plays are even more a small niche.

The Dragon Trilogy by Robert Lepage remains, twenty years after I saw it, the show that changed my theatre life the most. It was the time I was seeing a show demonstrating that it was possible to stage stories with many different cultures and languages, and creating such a dialogue between oriental and western culture. As a Mauritian, I was fascinated by the fact that a minor invisible identity was able to be brought to light and carry such a universal story in the end, and be seen on tour all over the world. It marked my practice for ever and it turned me into a director, because I knew that no one else would offer the work I wanted to do.

Every time I’m asked I always answer the last production I did, just because it’s the freshest, because overall I’m very proud of the two Offie-nominated Moliere shows I directed with Exchange Theatre in 2017 and 2018. But during the hardship of covid, after the trauma of the murder of George Floyd, I wrote and directed an anti-racist show that went straight to streaming, THE CAT IN REBOOTS, using the Puss in Boots story to explain bias, prejudice and racism to children. The process I used in rehearsals to create the show is one I’m very proud of because in order to address the topics of the show we needed to frank and difficult conversations in the room and I learned a lot from it, on my own bias, as much as how to create this space of dialogue. This is the process I’m currently bringing to the Young Vic too in my piece Tempests as part of Five Plays.

What things in your personal life do you draw upon when you direct?

I don’t know if it’s true for all artists but I tend to believe that there is always a correlation between what we seek in our personal life and what we investigate in our art.  Whether I like it or not, my quests or the questions I ask myself always end up in the pieces I’m working on. When I didn’t feel that my work was taken seriously, I directed a farce about a man who wants to be taken seriously, when I was questionning my own Misanthropy, I ended up directing Moliere’s Misanthrope… Right now, I’m trying to amplify invisibilised mixed race identities and it’s at the heart of the play I’m directing.

Are there any actors/actresses you would like to direct?

I’m passionate about third-culture people, performers who understand and and have a lived experience of a double-culture, often multiilingual, and frequently first or second generation migrants, like I am. Unfortunately only a few performers represent identities like these, despite their huge presence in our society, in political leadership or even on screens with people like Riz Ahmed, John Boyega, Meera Syal.  Indira Varma and Lucian Msamati are the rare leading celebrities in theatre emerging from this kind of background. I’d want to find more people like this. I’m so proud to have cast Diana Bermudez and Michael Abubakar right now at the Young Vic, though it involved pushing the boundaries of casting, and probably cause headaches to the casting director.

Which director do you respect most on OffWestEnd at the moment?

Greek director Anastasia Revi has been running Theatre Lab company for twenty years on the Off West End, offering a truly different type of aesthetic to UK theatre, not only through the sensorial dimension of her work but also through her ever-evolving process. Like many migrants, her work is invisibilised despite selling out for every production. I was playing Lloyd George in her production of Emmeline Pankhurst’s story last month at the Cockpit Theatre and it was getting 4 and 5 stars all over. Still, no National press or recognition from major programmers for her unique voice.

Can you tell our readers about what you’re doing now/next?
As it has not been possible in 2020 and 2021 to produce a stage production in our 15th year, we’re releasing a documentary: IN Exchange. A window into the running of a small theatre company pre-pandemic, and the making of an Off West End theatre show, IN Exchange is a feature length documentary chronicling the highs and lows of my company Exchange Theatre producing Molière’s Misanthrope at London’s Camden People’s Theatre in 2018 (nominated for two Offies : best production and best video design). This film is released for the first time ever to celebrate the 15th anniversary of the company and is presented online and on demand on the Living Record digital arts platform – click HERE. It’s a unique look at our bilingual process and the reality of producing on the Off West-End.