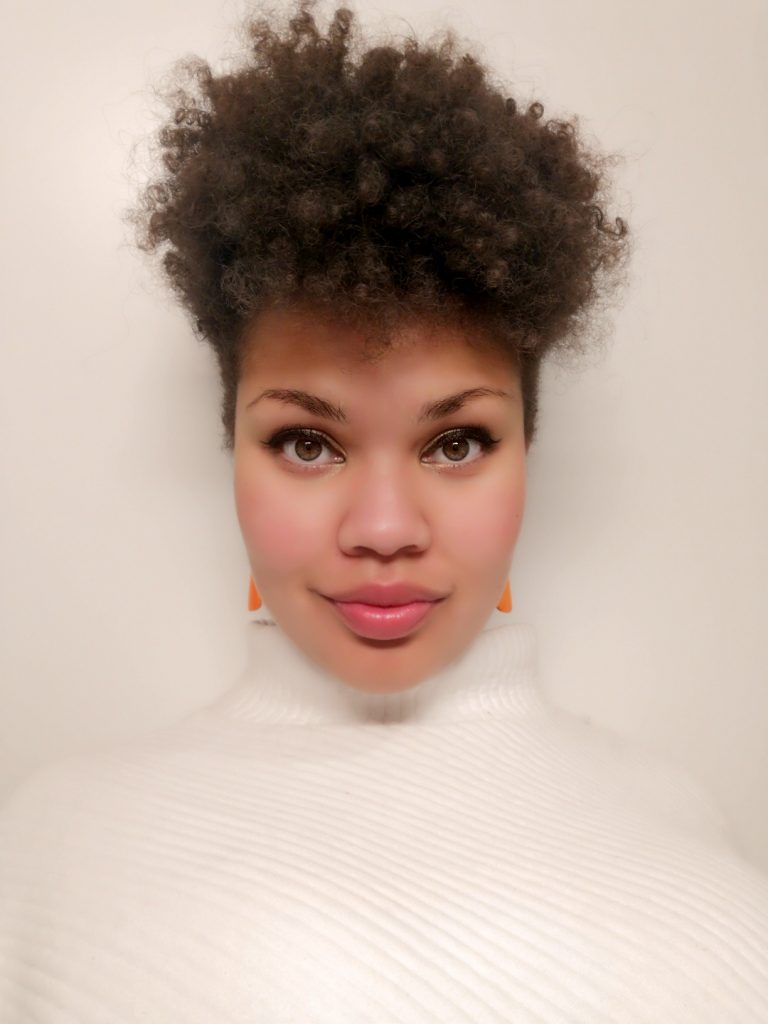 Simone Ibbet Brown is a theatre-maker and performer, trained at the University of York and Guildhall School of Music and Drama, where she recently completed a fellowship on artist-activism. She’s a BBC Next Generation Voice 2019; Women of the Future Awards-winner 2020; and Hera co-founder, celebrating and sharing music and stories by equity-seeking artists.

I grew up out in the sticks away from theatre-land, so really it was books and TV that inspired my love of story-telling, of meeting people and visiting places you’d never have the chance to in real life, and learning of lives outside your own. So I often imagine I’d only got into theatre at uni, but really it had begun years before that – making up stories with my mates in the playground, me and my neighbour acting out our favourite scenes on the step outside my house, lying on the kitchen floor wrapped in a blanket memorising lyrics from CD sleeves. (Also my mum took me to see a play about Winnie the Pooh when I was four and it was well good.)

If you could pick any one person or theatre/opera company to work with on your next project, who/which would it be?

Oh man, so many incredible artists to choose from! Half of me wants to go wild and say a multi-hyphenate icon like Janelle Monaé or Donald Glover; or someone whose work outside of the theatre sector is vital and requires amplification in every medium possible like a climate scientist or activist… But honestly? I’d love to create something with April Koyejo-Audiger, Themba Mvula, and Rachel Oyewale, all three brilliant, multi-faceted artists with activist mindsets, who I’ve sung with, gossiped with, and admired for years.

What is your opinion of Off West End theatre and opera in general?

This is probably a cliche but I think it’s the lifeblood of our theatre and wider creative sector! It affords opportunities to create without a powerhouse organisation behind you and their sometimes strict requirements or gatekeeping, and is often much more affordable to watch. I used to work at Paines Plough as an administrator, and the creativity, adventurousness, warmth, and passion for equity inspires me in everything I do, and is the mark I bench myself against.

Yeh, that’s definitely not a phrase, is it.

What was the most inspiring production you have ever seen? Why?
Again, so many to choose from but We Ask These Questions of Everybody by Toria Banks was pretty life changing. (Yes, it’s a Hera show but I’m not just plugging my own work – that was all Toria, Amble and their amazing team!)

What piece of work are you the most proud of?
Tough question! Honestly, it can be difficult to feel unmitigatedly proud in this industry, and with the creeping thought that I should’ve tried to become something more obviously or immediately useful like a doctor (I’d be a terrible doctor), but…? It was a hard process but the brilliant Cassiopeia Berkeley-Agyepong and I wrote Shuck’n’Jive (née The Next Jessye Norman) a few years ago. It was a real labour of love and confusion, and incredibly personal (it’s about friendship, misogynoir, the act of creation, futility, duty, hope… and fun songs); so the feeling when we realised that other people, in watching it, felt seen, connected, hopeful, moved to action, well, anything(!), was unmatched. It’s easy to feel and be alone out there, so managing to help someone feel like they’re weren’t, even for just one evening? I did feel proud.

What things in your personal life do you draw upon when you direct?
It really depends on the show, but to some extent, everything. Theatre is always about people, and the person I know best in the world is me, I’m my own lens and I am painfully aware that I can never be truly objective. So I try to work on projects that I believe I can contribute something to, utilising my experience, skills, flaws, some aspect of myself. More widely, I think we’re becoming better at letting people tell stories of their own selves and communities rather than co-opting others’ – this isn’t to say everything should be autobiographical, and there is magic in a story freely given to someone else to tell, just that when we represent particularly marginalised communities onstage, we should be thrilled to welcome firsthand knowledge of that community, and then, not to put too finer point on it, the profits and benefits should go back to the source of the material.

Are there any actors/actresses you would like to direct?
It’s not one performer, but I was recently associate on a show with an 80-strong company of young people aged 8-20 – we had an absolutely brilliant time and they were so full of creativity, intelligence, generosity and fire. Before rehearsals began we wrote some short songs together about their predictions for the future of the world, and I’d love to help them develop those verses into a whole multi-genre informative-protest-inspirational cabaret-opera-gig-album.

Which director do you respect most on OffWestEnd at the moment?
So many creators who explore the role of their work outside their sector. In particular, not a stage director as such, but Ben Comeau makes incredible activist work that can be found on streets as much as on stages. They use all the skills of their incredible creative voice to inform and inspire individuals, communities, and people in power to work towards necessary political change.

Can you tell our readers about what you’re doing now/next?
I’m currently in rehearsals for Henry James’ The Aspern Papers with Pegasus Opera, but I’m also looking forward to creating a multi-genre pop up show loosely based on the Orpheus myth for Opera North; directing The Endz with Multi-Story Orchestra, an important true story in gig form written by an amazing group of young people; and writing another, pretty different, true story in concert form about trailblazer Joseph Boulogne for Glyndebourne Touring Opera.